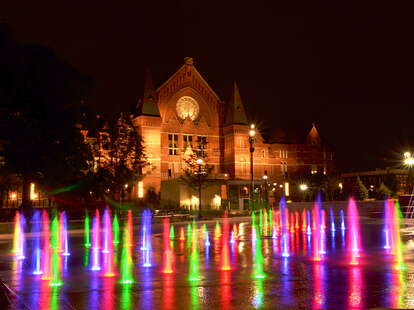 Cincinnati is a hidden destination, full of things to do and see, but often overlooked as a hub for cultural activities in the Midwest. Not only is its food scene bigger and better than I thought, but it’s also home to a number of arts and cultural institutions that make the region worth visiting, as well as the lush northern Kentucky region with an abundance of distilleries. The list is long, so to help you see some of the biggest and best events, museums, and venues, we’ve rounded up some must-see spots:

Founded in 1920, the Cincinnati Opera is one of America’s oldest opera groups and works with the Cincinnati Symphony Orchestra to host exceptional performances. This year marks the company’s return to the Music Hall, a stunning 3,400-seat theater classified as a National Historic Landmark. (The pandemic era shows were held outdoors at Summit Park in nearby Blue Ash, Ohio, mirroring the company’s start as an outdoor troupe housed at the Cincinnati Zoo Pavilion.) This summer’s program includes classics like Bohemian And Pirates of Penzanceas well as a sumptuous production of Aida. Even opera novices will find something to marvel at in these wonderful theatrical productions.

The Cincy region is much larger than Cincinnati itself, and includes the northern Kentucky regions famous for their bourbon distillation. This area includes the B-Line, a series of five distilleries, eight bourbon bars and six restaurants serving the brown liqueur of the same name. Stop at any of the locations to collect a passport, which will track your progress – visit two in each category and they’ll even send you B-Line merchandise. Keep an eye out for events, as line stops regularly host tastings, social hours, and more.

Late summer isn’t always a sad time, especially when you’re in Cincy. Labor Day weekend means Riverfest, a long day of live music, fireworks, and a crowded boardwalk with boats. It also features the Rubber Duck Regatta, a race for the benefit of a local food bank that plans to drop thousands of rubber ducks into the Ohio River and let them “race”. (It’s not all just for a good cause, if your duck wins, you can drive away in a free car or $ 1 million in cash.) Crowds line both sides of the river in Cincinnati and Newport and Covington, KY, and also compete with who can cheer loudest before the fireworks display. This year’s training and timing information is yet to be announced, so keep checking.

The best art is the avant-garde and the avant-garde, and this is where the Contemporary Arts Center shines: presenting fresh artists in an engaging and expressive space. Housed in Zaha Hadid’s first American building, the CAC has developed a reputation for spotting emerging talent before they become famous, as well as featured presentations of street art, new media and modern surrealism. The museum is continuing this tradition with events such as Tomorrow at this timea performing arts festival and exhibitions including the work of Kahlil Robert Irving, which is literally woven into the carpet in the atrium of the CAC.

Ohio’s oldest public market is a constant celebration of food in all its forms. Located in downtown Cincinnati in the historic Over-the-Rhine district, Findlay Market operates Tuesday through Sunday as a farmers market, specialty shop and merchant showcase. As a vibrant gastronomic hub, it also hosts all kinds of events, including cooking classes, musical guests, and cultural celebrations such as German-American Day. Thanks to their community activity accelerator and incubator, it is a center for emerging businesses and an ideal place to support emerging young people on the food scene.

The American Sign Museum is an off the beaten track museum option that is just what it sounds like: a collection of classic signage of all varieties. Visitors can see snapshots of the story through the diversity of graphic designs and techniques used by the shop windows. Exhibitions and events include genre-specific collections such as Spotlight on Main Street: Cincinnati-style foodie signs, which includes the famous neon Skyline logo. Speaking of neon, don’t forget to check out Cincinnati’s Neonworks, a full-time neon sign studio working within the museum. The museum is also home to the “Signs and Songs” concert series, which brings bands to play in front of a bright neon background.

BLINK is all about creating large-scale works of art. With the focus on “Future City”, BLINK, which will take place from 13 to 16 October, brings together artists who paint murals, perform music and build light and projection installations on the scale of buildings to create the most majestic works that bring the city and Northern Kentucky hot spots come to life. It’s four nights of events, spanning 30 city blocks, making it the largest light-mapping and projection art festival in the nation. For anyone looking for a taste of how BLINK puts on the wildest light show in the country, a quick check on Instagram will give you an idea. It is a party not to be missed.