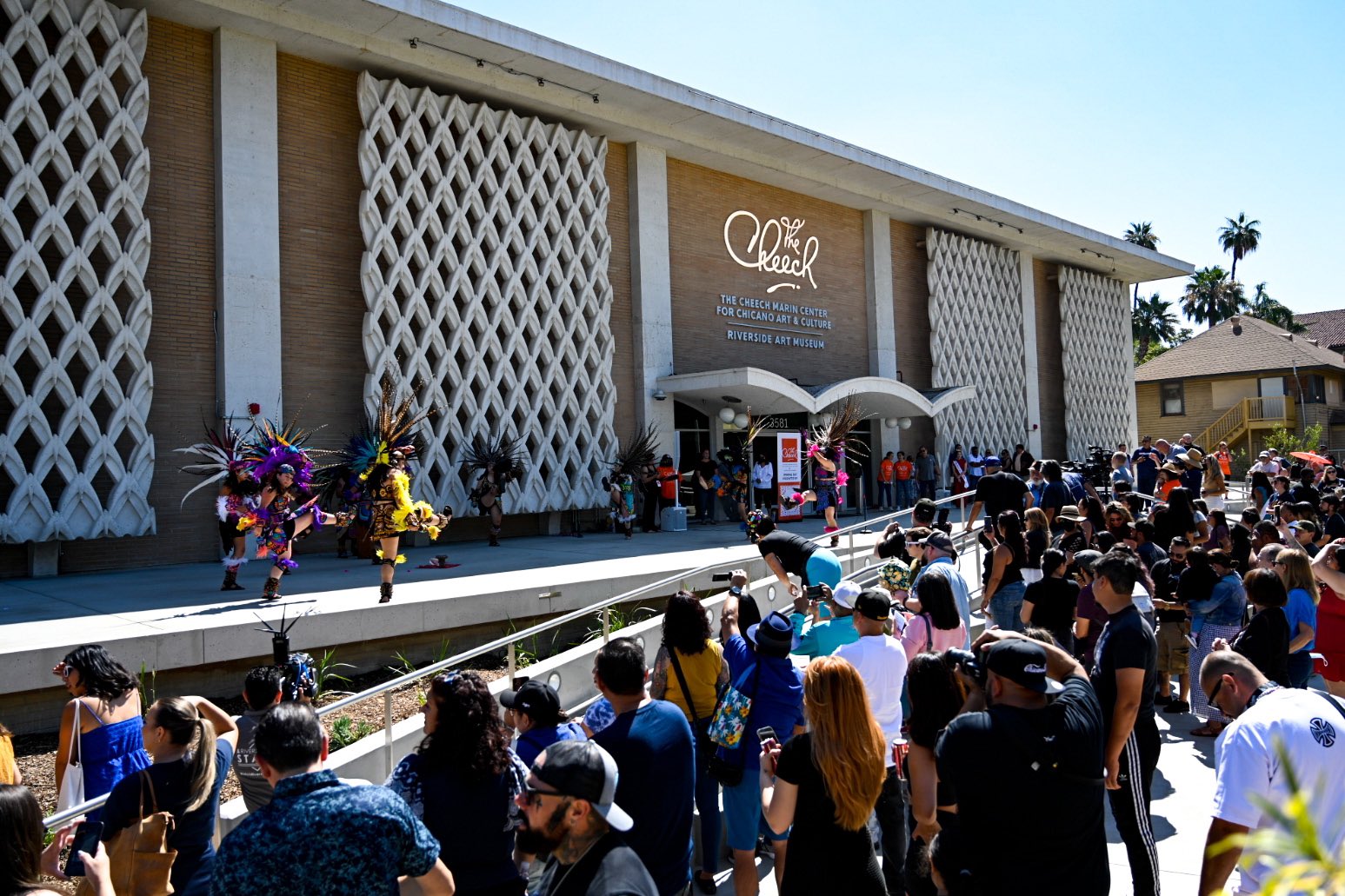 With the arrival of a gleaming blue lowrider and the cheers of the crowd, “The Cheech” has opened its doors in downtown Riverside.

After five years of planning and fundraising, the Chicano art museum of comedian and actor Cheech Marin welcomed its first guests on Saturday morning, June 18, with a street celebration to announce a place that should put the city on the artistic map. national.

At around 10, Marin – wearing an orange cap with the museum logo – jumped out of a 1962 Chevy Impala lowrider and opened the doors of the Cheech Marin Center for Chicano Art & Culture with Riverside Mayor Patricia Lock Dawson.

Opening day was sold out, but ticket holders – and others – had a lot to say about the museum’s cultural significance.

“We have so many Hispanic communities in Riverside, and that will unite them,” said Maria Batres, of the Ballet Folklorico de Riverside, whose company performed a blessing in front of the museum before Cheech entered.

Lock Dawson joined a group of museum staff who cheered the first visitors as they entered the museum in the city’s former main library.

They included JoAnn Jimenez, whose group was at the forefront.

“That’s great, where do I start?” she said, standing in front of a 26-foot-tall lenticular that extends to the ceiling, the first piece of art visitors see. The untitled work was created by the brothers Einar and Jamex de La Torre.

The museum nicknamed The Cheech was created as the home of Cheech Marin’s extensive Chicano art collection. He started building it in the 1980s after finding fame with Tommy Chong in the comedy duo Cheech & Chong, followed by a film career. The center now houses around 550 paintings, photographs, sculptures and other works from Marin’s collection. Located next to the Mission Inn Hotel & Spa, the new museum is expected to attract 100,000 visitors a year.

He described Chicano art as stemming from the protests of the 1960s and evolving over the decades in a way to represent how real people live their lives. He called it a mixture of Mexican art, world art and pop culture.

Marin began to be known as an art connoisseur over the past 20 years when he started sending his collection to major museums such as the Los Angeles County Museum of Art.

The idea for a museum in Riverside began in 2017, when his collection was displayed at the Riverside Art Museum, and then City Manager John Russo and other civic leaders introduced the idea to Marin. Subsequently, planning and fundraising began.

“Someone asked me how it feels now in the end,” Ofelia Valdez-Yeager, Riverside resident, community leader and president of the Reach for the Cheech campaign, said during a dedication ceremony on Thursday, June 16. “She looks like she’s been pregnant for five years.”

The Cheech came together as a $ 14.5 million public-private partnership with major donors such as Bank of America and Altura Credit Union, as well as a nearly $ 1 million annually citizen grant to the Riverside Art Museum, which is been in charge of managing it.

The Cheech is housed in the former Riverside Main Library, a 1964 building that retains its mid-century modern exterior but has been overhauled inside.

Now, instead of a chest at the entrance, visitors see the de la Torre brothers’ lenticular giant, which includes several themes of Chicano art. Images include an Aztec goddess, native California flowers, a map of East Los Angeles, and the face of Cheech Marin himself.

The creators of The Cheech see it as a platform to spread the influence of Chicano art around the world.

“We hope this building, this collection and this community participation will be a beacon for everyone else in the country to finally redefine inclusion,” Marin said at the ceremony. “Now he will be embodied in a place where they can come.”

Marin said she took all her children to Riverside to see the museum.

“They are really amazed, as I am: to have an entire building used to promote a part of culture that has long been neglected and is now represented.”

“I couldn’t be prouder of everything I’ve done in my career or life.”

When: It opened on Saturday 18th June and was sold out on the first day. Reservations are timed and must be made in advance on the museum’s website.

Hours: Every day from 10:00 to 17:00. The museum will remain open until 8pm on certain Thursdays and will be closed on Tuesdays in August.