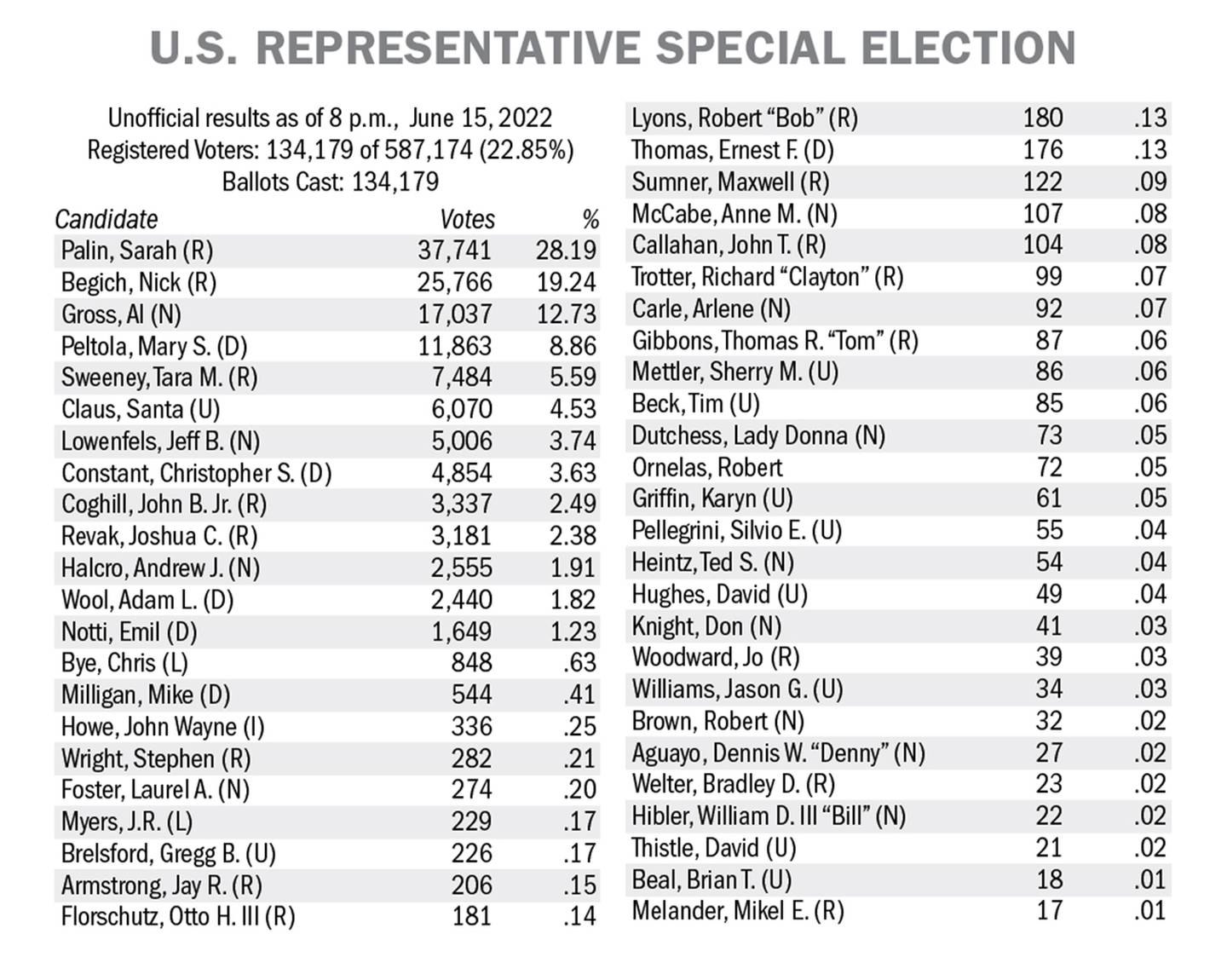 Republicans Sarah Palin and Nick Begich, independent Al Gross, and Democrat Mary Peltola solidified their leadership in the race to advance to the August special general election for Alaska’s only seat in the United States House, according to a tally. updated Wednesday.

By Wednesday evening, officials had counted nearly 134,000 ballots. Another tally is expected on Friday, with a final tally on Tuesday and the goal of certifying election results on 25 June.

The top four voters in the 48-candidate special primary will advance to the special general election on August 16. The result of these elections will determine who will serve Don Young’s two of the late United States representative in recent months. duration of the year. Young died unexpectedly in March after 49 years in office.

Another election to determine who will serve a full two-year term is expected in November, with the primary in August.

Palin, in his first campaign since stepping down as governor of Alaska in 2009, is leading with 28.2% of the vote so far. Begich, a businessman and member of a prominent Democratic family, has 19.2% of the vote. Gross, an orthopedic surgeon who unsuccessfully ran as an independent candidate for the U.S. Senate in 2020 with the approval of the Democratic Party, is third with 12.7 percent of the vote. Peltola, a former state parliamentarian on leave from his job in fisheries management, is in fourth place with 8.8% of the vote.

Republican Tara Sweeney, an Alaskan native leader who has held high-ranking positions in the United States Department of the Interior and Arctic Slope Regional Corp., is in fifth place with 5.6 percent of the vote. Santa Claus, an independent progressive member of the North Pole city council, is in sixth place with 4.5% of the vote.

[One election down, three to go: Here’s what’s next in Alaska’s U.S. House race]

Palin, Begich and Gross already seemed certain they would go to general elections according to the results published on Saturday. But fourth place was previously less certain, with some wondering if Sweeney could overtake Peltola. The results released Wednesday increased the likelihood that Peltola, with a 4,300 vote lead over Sweeney, would advance to the general election.

“I felt that the second batch of counts would go in trend with the first batch, but they are doing even better for my campaign,” Peltola said. “I’m very excited about this.”

Peltola contracted COVID-19 during the campaign in Juneau last week. She tested positive for the virus and was isolated in Anchorage. She said she hopes to return home to Bethel later this week and that she will resume the campaign in Anchorage once the election results are certified.

“I’m absolutely not motivated to go out and act like it’s a done deal,” Peltola said. “I still think it’s too early to celebrate.”

In a statement released Wednesday night, Sweeney appeared to concede the primary match but did not say if she would stay in the running for the two-year term.

“My goal was to get into the top four in the special elections. Based on the release of Election Division yields, it looks like I’m not going to measure up. Over the next few days, I will be meeting with my campaign team and supporters to determine the next steps for the regular election, ”said Sweeney, who ran for a moderate Republican.

Sixth-place candidate Claus – born Thomas O’Connor – said on Wednesday he had not yet given up the chance to advance to the general election.

“I’m happy for Mary, but I’m going to hold on because we still have two vote counts to go,” said Claus, who campaigned on child welfare issues. “I think the results may change.”

The top four are also running for regular November elections to fill their seat in the US House for a full two-year term starting in January. The primaries of that race, which currently include 31 candidates, will be held on the same day as the extraordinary general election, August 16.

“We have two races to think about in August,” said Jones.

According to data released Wednesday, the state rejected 6,255 of the 161,000 votes received so far, or about 3.5%. That percentage is similar to the proportion of absentee votes rejected in previous years, but the overall number is much higher because these elections were held almost entirely by post, with many more voters using absentee ballots. And in some regions of the state where English is not the primary language spoken in many homes, the ballot rejection rate was significantly higher.

This includes some rural and indigenous voting districts: in the central town of Bethel in southwestern Alaska, where Peltola is from, 17 percent of ballots were turned down.

“This is no surprise,” Peltola said. “In Alaska, we take our summers very seriously. That leaves a lot of time and attention for things like learning a brand new ballot system. “

Senators called the statistics “stunning and unacceptable” and said they are “looking for an immediate explanation of the reasons for the refusals and how the division plans to ensure that such failures in the voting process never happen again.”

Electoral Division spokesperson Tiffany Montemayor said the division did not review the letter and currently has no response to concerns raised in it.

“These numbers, when verified, mean that Alaska natives and other minorities and residents of less affluent areas have been denied the right to vote,” said Senate Minority Leader Tom Begich, a Democrat from Anchorage, in a declaration. “Voting by correspondence works, but only if it is implemented in such a way that all citizens have the possibility to count their votes”.