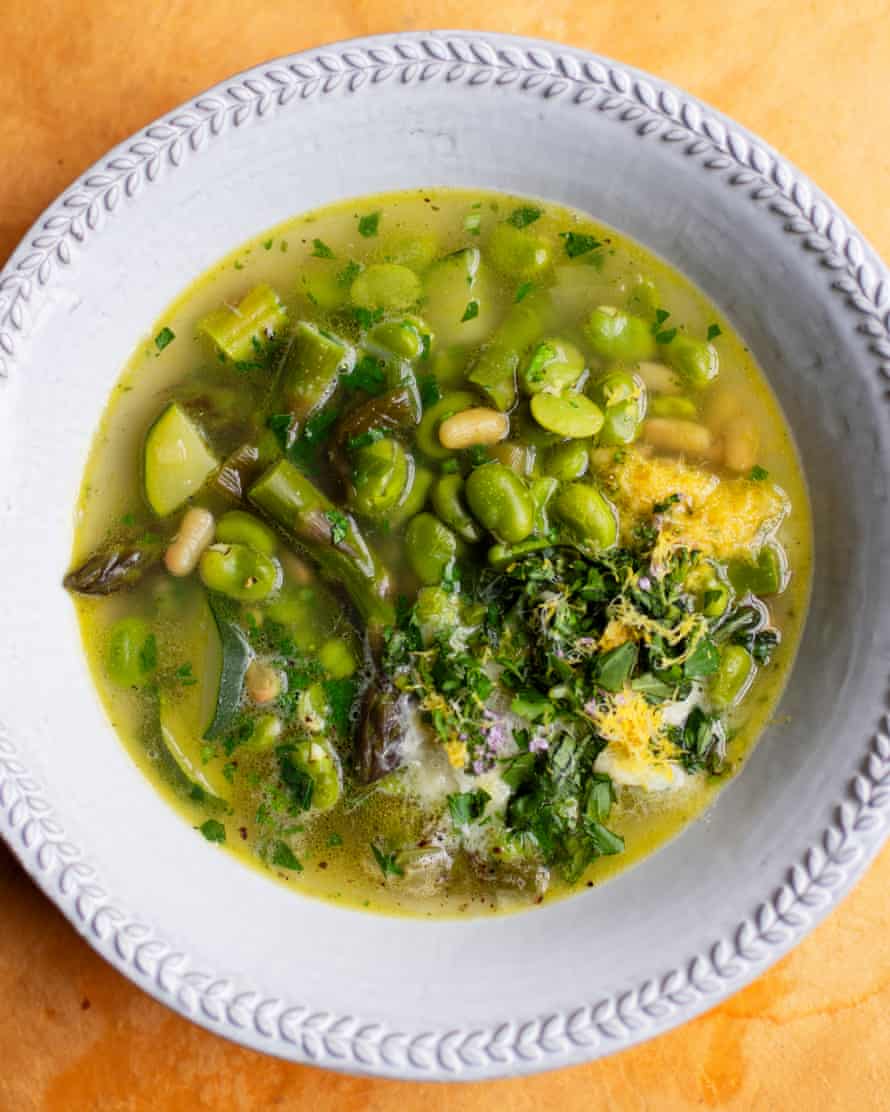 Lunch was in the garden, with jam-potted flowers on the table and an odd assortment of chairs. A relaxed atmosphere with thick bean soup, bowls of salad – tomato and basil, potatoes and arugula, soft lettuce with primrose-colored heart leaves – and a wicker platter of goat cheese.

The bean soup was made with lean leeks which I originally took for spring onions, flageolet and broad beans and a bunch of cheap asparagus. I spiced things up with lemon zest, parsley, and parmesan and squeezed a lemon into the hot, green broth.

Later in the week I made another summer soup, this time with small plump cakes of shrimp, ginger and lemongrass at the bottom of the bowl, like sunken treasure. Both were light yet satisfying – a perfect accompaniment to an alfresco midsummer lunch.

I like to keep the pies tiny, barely bigger than a spoon or two. They are easy to stir-fry when small and are less likely to crumble when you toss them in sizzling oil. They are also worth having as sandwiches, wrapped in crisp lettuce leaves instead of the more usual bread, lettuce folds stuffed with pea sprouts or watercress, and a smear of wasabi paste. It serves 4

Place the breadcrumbs and the coriander leaves and stems in the bowl of a food processor. Add the fish sauce and mirin. Thinly slice the lemongrass and add it to the crumbs. Peel the garlic, peel and grate the ginger and add it to the bowl, then blend for a few seconds. Add the prawns and blend briefly. Be careful not to work the mixture too much: you should still see some pieces of shrimp.

Shape the mixture into 12 balls, flatten them slightly, then place them on a baking sheet and refrigerate for 30 minutes or until solid.

Heat the oil in a shallow skillet over medium heat. Place the shrimp balls in the boiling oil and fry them for 3 or 4 minutes on each side, until they are lightly browned.

Prepare the soup: peel the shrimp and put the shells and heads in a deep saucepan, add 1 and a half liters of water and bring to a boil, drain and remove the foam, then simmer for 25 minutes. Top up with liquid if necessary.

Divide the chilli in half lengthwise, then scrape and remove the seeds. Peel and cut the ginger into fine matches. Clean and finely slice the garlic.

Heat the oil in a wok or high-sided skillet, then add the finely sliced ​​garlic and fry briefly. Add the chilli and ginger and cook for a minute or two before adding the shrimp. When they start to turn from gray to pink, pour the filtered broth over it and bring to a boil. Allow the soup to simmer for 8-10 minutes, then add the fish sauce and lime juice. Place 2 or 3 of the cooked shrimp cakes in deep bowls, then pour the hot soup and shrimp over them.

I find the soup to be enough for a summer lunch when it’s made with all kinds of vegetables and beans pushing each other, ladle it into your bowl generously, and there’s good bread and cheese to follow. I keep the soup green and summer with asparagus, broad beans and zucchini, but you can also add tomatoes. The recipe can be made vegan, as desired, by eliminating the Parmesan.

Clean the beans, boil them in lightly salted water, then drain and let them cool under running water. If they are small and very tender, leave the peel; if they are bigger than a fingernail then I suggest peeling them off the skin. It doesn’t take long once you’re in the rhythm of it.

Halve the lemon and squeeze some of the juice into each bowl, then sprinkle with Parmesan, lemon and parsley

Thinly slice the leeks. Heat a couple of tablespoons of olive oil in a large, deep skillet over medium heat, then add the leeks. Cook them for 7 or 8 minutes, stirring occasionally, so that they soften without coloring them. (You can prevent them from darkening by covering with a lid or a piece of parchment paper so that they cook partially in their own steam.)

Peel and cut the asparagus into rounds and stir in the leeks, then do the same with the courgettes. Continue cooking for 5 minutes, then pour in the broth and bring to the boil. Drain and stir in the flageolets and a little salt, lower the heat and let it simmer for about 15 minutes. Finely chop the parsley. Finely grate the lemon zest and then add it to the grated Parmesan.

Check the soup for seasoning – it may need salt or black pepper. Pour into bowls, cut the lemon in half and squeeze some of the juice into each bowl, then sprinkle with Parmesan, lemon and parsley.