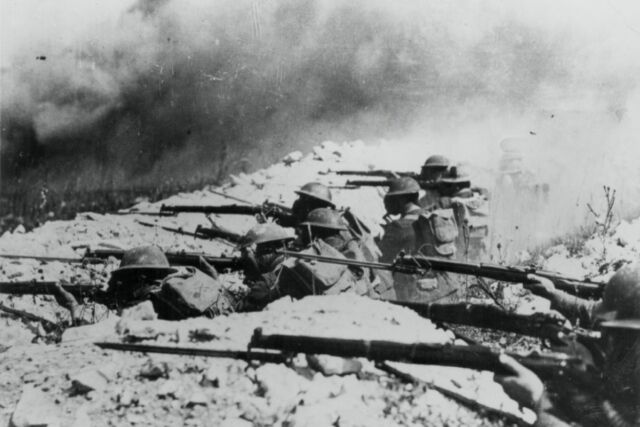 In August 1917, a British WWI soldier named John Glubb was shot in the face by a bullet. He remembered the blood flowing in the “torrents” and the sensation of something like a chicken bone moving around his left cheek. It turned out to be half of his jaw, broken by the impact.

Glubb wasn’t the only unfortunate WWI soldier to suffer a disfiguring facial wound. The shrapnel-filled projectiles were designed to deal as much damage as possible, and the need to peer over the railings of the trenches to assess the battlefield or fire a shot meant a greater risk of being hit in the face by flying metal shards. Unlike the loss of a limb, these soldiers faced great social and professional stigmata when they returned home from the front due to their disfigurement. They were usually reduced to working night shifts and relegated to special blue benches when out in public, a warning for others to look away.

Fortunately for these men, a New Zealand-born surgeon named Harold Gillies has dedicated his life to developing innovative techniques for reconstructing faces after witnessing firsthand the carnage during his service at the front. Once home, he set up a special unit for soldiers with facial wounds at Cambridge Military Hospital in Aldershot, eventually convincing his superiors that a dedicated hospital was warranted. He is often referred to as the “father of plastic surgery” due to his pioneering work at Queen’s Hospital (later renamed Queen Mary’s Hospital) at Frognal House in Sidcup.

Gillies is a key figure in a new book by author and medical historian Lindsey Fitzharris, titled The Facemaker: A visionary surgeon’s battle to repair disfigured WWI soldiers. A well-known science writer with a great Twitter follows and a fondness for the macabre physician, Fitzharris published a biography of the surgical pioneer Joseph Lister, The art of slaughterin 2017: a fantastic, if sometimes creepy, read.

His work soon attracted the attention of the Smithsonian Channel, which reached out to Fitzharris to host their 2020 documentary series revisiting the infamous historical cases of cold. The curious life and death of …. Fitzharris usually has several ideas for books bubbling into oblivion at any given time. For example, she has a children’s book coming out next year illustrated by her husband, cartoonist / caricaturist Adrian Teal, and is already working on a third book about a 19th-century surgeon named Joseph Bell, which inspired Sherlock. Holmes by Sir Arthur Conan Doyle.

The Facemaker it wasn’t his first choice for the sequel The art of slaughtersince she was not very well informed about the First World War. But her editor loved Gillies’ story, so Fitzharris took a crash course on the history of that period. “The art of slaughtering it’s hyper-focused on one man, Joseph Lister, who applied germ theory to medical practice, “Fitzharris told Ars.” This is a book not about one man, but about many men. It’s about Harold Gillies, the pioneering surgeon who reconstructed the faces of soldiers during World War I, but also about these disfigured men. I hope their voices really shine in the narrative. “

Ars spoke to Fitzharris to find out more.

(Warning: some photos and graphic descriptions of facial reconstruction follow.)

Ars Technica: This is such a vast topic. How did you reduce the focus so that the scope was manageable?

Lindsey Fitzharris: True, it was a much more complicated story. I think that’s why it took me five years to write, dealing with the scale of World War I, with military medicine at the time, with all these complicated advances. One of the challenges of World War I is that there is so much material: so many journals and letters from soldiers writing about their experiences. Someone asked me what the difference is between academic history and the commercial history that I write. Much of what I do now is discard information. I’m absorbing a lot in my research, but pushing it away because I don’t want to overwhelm the reader. I want to find the pulse of history.

I knew I wanted to drop the reader in the trenches from the start. There is a man named Percy Clair who wrote this beautiful diary that allowed me to tell the story of what it was like to be wounded, hit in the face, and stay on the battlefield for quite a while before I was healed. I wanted readers to understand how difficult it was to first get off the battlefield and then get to Gillies, because Clair was initially sent to the wrong hospital.

There have also been complications relating to accessing patient files in the UK and what you can and cannot say about a patient’s name. When I use a patient’s name in The Facemaker, is it because that knowledge is public, or Gillies himself published it at some point. If Gillies published about a certain patient, if I went into the case files and found additional information that he did not include, I could not use that information in relation to that person’s name. The art of slaughter it didn’t have that complication because it was set in the 19th century. Everything was old enough that we didn’t have to worry about all of this. But a lot of material for The Facemaker is protected by copyright. I had to contact Percy Clair’s family members to get permission to quote his diary to the extent that I did.