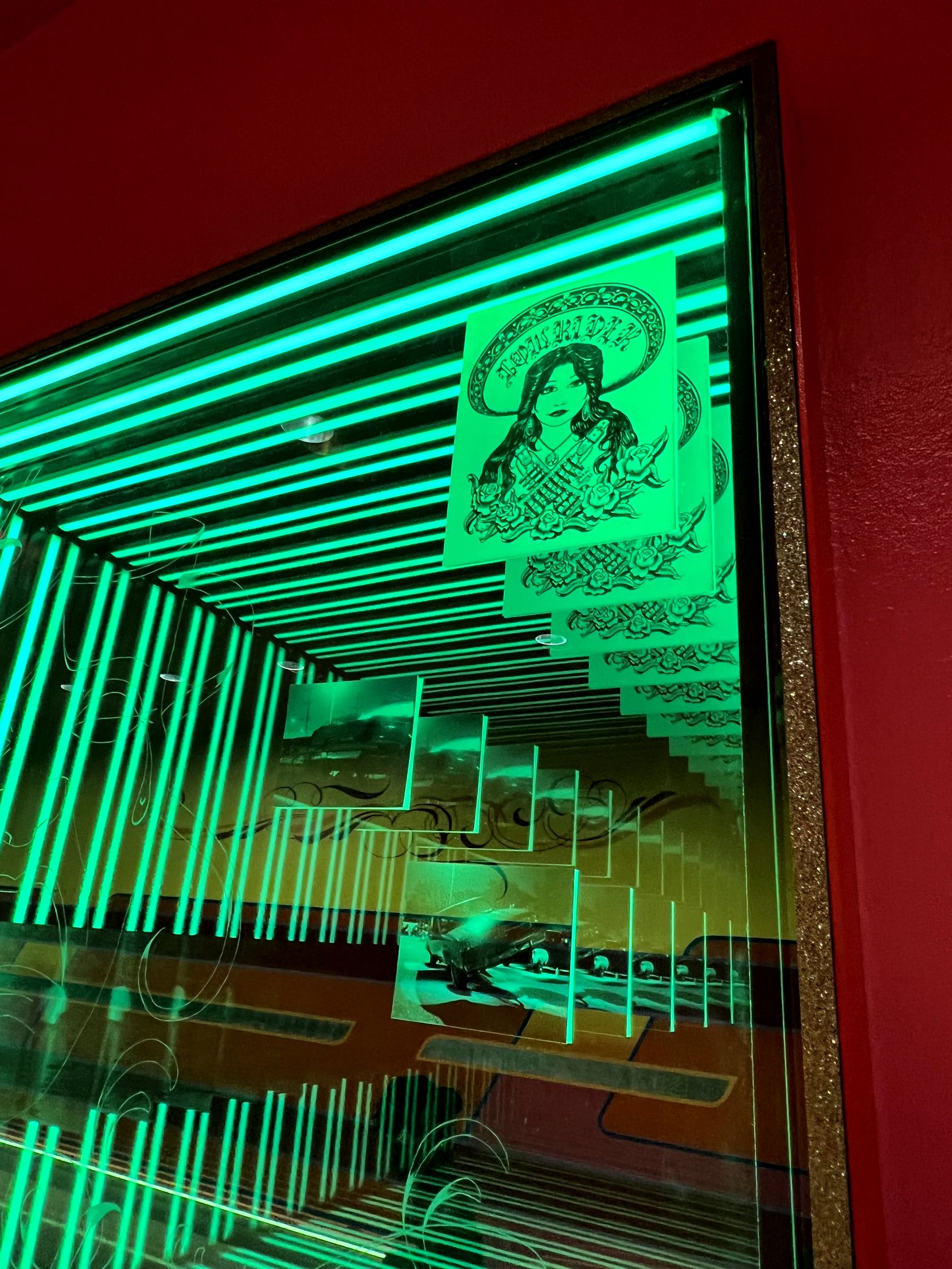 Since 2015, the Dallas Museum of Art has invited artists to create site-specific murals along the museum’s 153-foot walkway for its Concourse Mural series.

Los Angeles-based artist Guadalupe Rosales has transformed the space, now in its fifth iteration, into a lowrider’s fantasy land: a tribute to the Chicano automotive culture that defined his youth.

Entitled “Drifting on a Memory,” the exhibit features a custom mural in vibrant stripes of yellow, pink, orange and red, designed and executed by Rosales in collaboration with Dallas lowrider artist Lokey Calderon and Fort Worth artist Sarah. Ayala. The swirling freehand pinstripe, a Calderon specialty, completes the paint job. A spinning disco ball lights up the walls.

Green neon lights flow along the underside of the mural, echoing the dynamic glow emitted by the lowrider carts. Two mirror boxes lined with neon lights are set into the walls, engraved with custom graphics and topped with photographs from the Rosales archive. Looking inside, the lights and images appear endless, repeated over and over until they disappear: moments captured in time, memories framed by the glow of passing road signs.

The rectangular window overlooking the museum’s Center for Creative Connections has been covered in pink velvet quilted to mimic the interior of a car. A bouquet of flowers wrapped in a blue bandana rests on its surface as a disco ball spins above. A soundscape recorded by Rosales during the cruise echoes throughout the boardwalk.

Dating back to the mid-20th century, California’s lowrider culture is a subsection of the evolution of American automotive culture and the “hot rod” era.

After World War II, many Mexican American servicemen returned as highly skilled mechanics, now able to purchase vehicles for military pay. As cars became more and more necessary and common, these veterans and others began modifying them with custom paint, graphics, interiors and suspension systems. These vehicles became not only a matter of personal pride, but clearly symbolic of Chicano culture and the growing Chicano Revolution.

Taking up space and being seen has become a targeted form of activism for a long-marginalized community. The “low and slow” approach to driving has become a way to maintain maximum visibility and promote social engagement.

Rosales grew up in East Los Angeles during the tumultuous years of the 1980s and 1990s, when the city’s minorities were rocked by the Los Angeles riots and crackdown on illegal immigration. She began “cruising” (riding lowrider) as a young teenager and became a member of a “party group”, throwing underground raves in crumbling warehouses, a movement that heralded the growing entrepreneurial spirit of minority communities and the commercial success of the west coast street culture.

After suffering losses – including her cousin – from gang violence, Rosales moved to New York City. A decade later, she returned to Los Angeles, stronger than her identity as a Latinx queer artist and ready to face her past. In 2015, Rosales started the social media project “Veterana y Rucas” (@veteranas_and_rucas on Instagram), a vintage photographic archive of California chicane women that is described as “reframing our past by sharing our stories for a better future.”

Rosales then created another photographic social media project, “Map Pointz” (@map_pointz on Instagram), dedicated to documenting the Los Angeles underground party culture of the 1990s. The name is a reference to the coordinates of the party which can only be accessed through a series of instructions. Both projects are a kind of personal yet collective visual diary, a way to reconnect and define a past that is specific to a region but that echoes in those of us who came of age in the 1990s, the latest era of the true face-to-face, analog humanity.

Looking back at the end of the installation, visitors encounter a rear-view mirror engraved with the title phrase “Drifting on a Memory”. You are immediately inside the exhibition and at the same time in the world that is yet to come, past, present and future enclosed in a single frame.