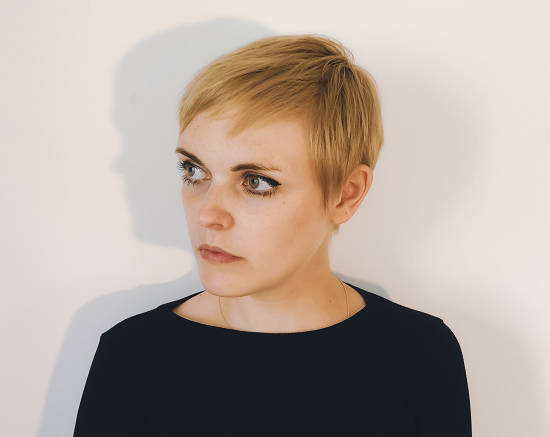 “My favorite pop music has always been the one from the second album, the one where they’re just getting used to what they’re doing,” says Jo Bevan. “That moment when they’re thinking ‘what does this do?’ When they are stretching slightly beyond the capabilities of the technology they are using or their skills. That, coupled with a really good melody or a really well written chord progression, is my favorite thing in pop music. ” “Born Ready,” released today exclusively for Quietus subscribers along with three phenomenal remixes, is actually just Bevan’s first real single as a solo artist, but it has all the same qualities he’s talking about, that charming sense of initial exploration, but with a superlative and irresistible melody inside.

She is by no means inexperienced as a musician. As the frontwoman of the indie band Desperate Journalist, she has honed her skills on four albums since 2014. “I’ve always found it really easy to write pop melodies that work well in a band,” she says. With “Born Ready”, however, “I was interested in seeing if I could push him as poppy as possible.” She had been experimenting with home production for years, first on GarageBand and then Logic, until she came up with her debut single, “literally just trial and error, to figure out what each preset does and how I can warp things. Now I’ve finally reached a phase in which I wrote a real song! ” She practiced for a while, trying to write in another artist’s’ style ‘, “like at the art college when you’re told to copy a famous painter or something, it was like,’ let’s see if it could do a Nine Inch Nails song, or an Underworld song, or something incredibly simple and pop. I love putting the blocks together and understanding how things work.

Bevan has always had a playful streak when it comes to pop music. Growing up, her parents had varied tastes, “which I am so grateful for” and as a child she played an old Yamaha keyboard and wrote “silly little songs” to get on with her melodies. Her work now “is really just an extension of that, I’ve just gotten slightly more experienced than when I was eight.” In his 20s, “I had this little Argos toy keyboard that cost a tenth and was bright pink, and I did these terrible covers of sub-Daniel Miller pop songs and post them on Facebook when I came home drunk from the pub, then delete them in the morning. . It’s just something I found really funny. About a decade ago he was part of a short-lived synth pop band. “I didn’t write anything, I just sang, but I really enjoyed being able to produce my voice in a more varied way. than what you usually do with guitar music “.

Bevan’s solo excursions are undoubtedly very different from Desperate Journalist, whose sound draws heavily from the tradition of guitar music rather than electronic pop. That said, there is also a range of foresight in that group. Says the band’s latest album Maximum pain! “It’s my favorite because we’re trying to do something more interesting in guitar, bass, drums and vocals.” The opening track of that record “Formaldehyde”, for example, which was significantly written by Bevan alone, centers around dark, sinuous keys, rather than guitars. For their next record, the four have changed their process to create each demo tracks on their own, a process by which Bevan feels “more and more confident” as her solo work progresses. “We would never want to write the same album over and over, because we don’t like other bands that do.”

For Bevan, part of the joy of experimenting is the act of hearing her voice in different contexts – even if a little drunken fun was part of the genuine pleasure of her post-pub Facebook covers. In her short-lived synthpop project ten years ago, she “really enjoyed being able to produce my voice in a more varied way than when you write guitar music”. It is for this reason that the three remixes accompanying Quietus’ release of “Born Ready” are so fascinating. Everyone is different from the others; UKAEA turns it into a fragmented and voiced banger. Ekoplekz rolls every corner until the song becomes a vast psychedelic canvas. Oh The Gilt takes the pop in the center of the song and overloads it, its second half gloriously extending into a freewheeling acid groove. “I love them,” Bevan says of the versions. “The Oh The Gilt is a Balearic masterpiece! I don’t feel valuable to music, so the main thing I was excited about was hearing which parts other people would consider to be the most important, particularly if people really ruined the voice. “

For all three remixers, what stood out above all else was Bevan’s gift for vocal melody. UKAEA wanted to “slow it down and add some grind”, As Dan Jones, protagonist of the project, says. “I was looking for a ‘Tom’s Diner’ acid dancehall vibe,” he says, and he used a generative patch to get a modular synthesizer to provide “an absolute fight” of a beat. Ekoplekz’s Nick Edwards, meanwhile, who describes himself as “not prepared to remix”, completely deconstructed Bevan’s voice. “I kept the remix at the same bpm as the original so I don’t have to worry about re-tune the vocals. Everything else is built from scratch. The rhythms come from an old Yamaha MR10 drum machine and I built the rest mostly by playing by hand over multitrack. The end result doesn’t fit any particular genre, but the main inspiration comes from dub reggae, cutting the vocals into fragments and adding ghostly trails of echo and reverb.

Oh The Gilt, meanwhile, which is a production duo consisting of tQ’s John Doran himself and Manchester sound engineer John Tatlock, are thrilled that they were able to do just about anything. “When I first heard ‘Born Ready’ on Soundcloud, I was blown away and couldn’t stop whistling it to myself and tentatively asked Jo if he would agree to Oh The Gilt remix it,” explains Doran . “I was surprised when she agreed to be honest as the only time she met her together, on a night called the Reeperbahn in London, we probably weren’t at our best.” Having “dosed catastrophically” on his way to DJ there, and hardly showed up at all “because I thought everyone on the number 73 bus was vampire,” says Doran who “was so decimated I could only read my laptop screen if I held my head two inches away from the screen. But then – and there’s no pleasant way to put it – I was sweating so profusely in my laptop that it broke permanently. I had to finish the set by borrowing CDs from Linn who ran the night and I just looped OMD’s “Georgia” until it was time to stop. I wasn’t asked to come back for a second set. “

For Tatlock, “the only thing I remember was staggering out for a cigarette, then accidentally walking away and completely lost.” (Asking a passer-by, who happened to be a Berliner on vacation, the signs for “Reeperbahn” produced only “the longest and strangest set of signs I’ve ever received.”) For the remix they leaned on that sense of chaos, says Tatlock. “I feel the second half of our remix captures the essence of this experience.” Adds Doran: “Another important” vibe “touchpoint for me is that a few years ago I went delirious with our friend Richard Augood at Portmeirion and we were watching Justin Robertson play a set that was like the acid house he undergoes. a Hawkwind or Acid Mothers Temple freak out. And I know that’s almost the dictionary definition of “punching above your weight”, but I hope there’s some of that wild mix in there. “

All four tracks are very different from each other, but whether it’s fragmented banger or acid bliss, all testify to the potential contained in exploratory and forward-thinking pop music Bevan herself has come to after years of Logic experiments. “I think it’s an advantage to be an amateur!” she says.

To receive Jo Bevan’s new EP, plus a host of other perks including exclusive essays, podcasts and playlists, and plenty of commissioned music, sign up for Quietus Sound & Vision. you can do it here