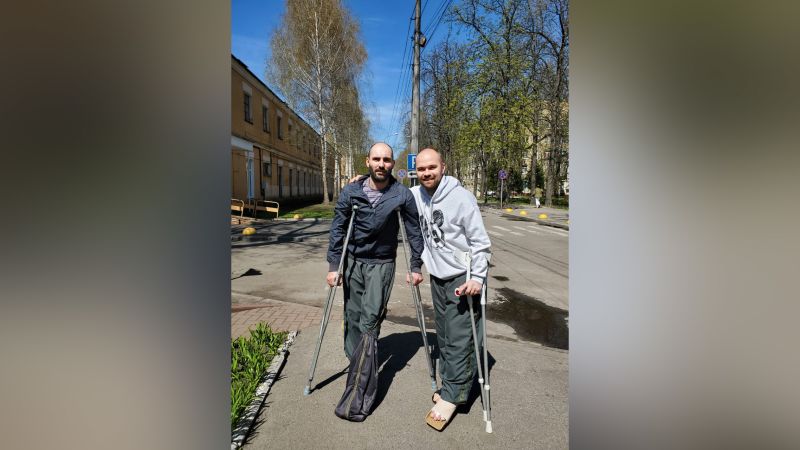 On 8 March, three Ukrainian military helicopters were shot down as they returned from a combat mission within Russian-occupied territory. The only two surviving pilots were seriously injured and taken prisoner by Russian forces.

In a lengthy interview with CNN, the two pilots said they were subjected to more than a month of abuse and threats in Russian custody, before taking part in a prisoner exchange.

The Russian Defense Ministry did not respond to CNN’s requests for comment.

Oleksii Chyzh, 29, and his friend and comrade in arms Ivan Pepeliashko, 33, had carried out missions every day since the Russian invasion began in February, despite the immense danger posed by Russian missiles and anti-aircraft batteries.

On March 8, an assignment took them north, near the city of Chernihiv. All four squadron helicopters completed the mission. But as they were returning to their base near Kiev, Chyzh noticed new enemy positions below them.

It was too late. Three of the helicopters were hit by enemy fire and crashed; Chyzh and Pepeliashko were the only survivors.

“I remember waking up frozen and in pain,” Chyzh told CNN, speaking at the hospital in the capital where both men are recovering from their injuries.

“I saw the helicopter wreck and smelled of burning fuel,” Pepeliashko said. “My leg was twisted on the other side.”

Both pilots had broken legs and Pepeliashko suffered spinal fractures as a result of the impact of the accident.

He tried to crawl forward, but sank his senses in and out. Then he saw several Russian soldiers appear.

“I begged them to shoot me. I was sure they came to kill us. ”

That day, Chyzh and Pepeliashko became the first Ukrainian helicopter pilots to be captured by the Russians, according to the Ukrainian army. Their reports of captivity are heartbreaking and the ill-treatment they claim violates international conventions on the treatment of prisoners of war.

The two pilots say they were loaded into an armored personnel carrier and taken to a field hospital, then transferred to a hospital in the Russian city of Rylsk, just across the border.

During the first days of their captivity, Chyzh says he was forced to read a statement on the camera saying he was fine, receiving treatment and opposed to war. The statement was later uploaded to YouTube.

“I was warned that if I didn’t read the statement, they wouldn’t treat me (and that) my legs would start to rot and be amputated.”

Chyzh says he was also told that if he didn’t comply, his co-pilot would not receive medical treatment and would likely die by morning.

For nearly two weeks, both pilots were unable to move, bedridden from their injuries.

They say they were interrogated every day about the Ukrainian military positions, how many Russians they had killed, the location of the biological laboratories and where the “Nazis” were hiding.

According to the Geneva Conventions, interrogation is legal but “subject to the prohibition of torture and coercion … as well as the requirement of humane treatment”.

At one point Chyzh said he was pushed to adopt Russian citizenship.

“They asked me: why do you want to go back to Ukraine? Look how big and powerful Russia is. There are many opportunities here, “Chyzh told CNN, noting the irony of hearing him in a hospital room where a dirty sheet of paper covered a broken window.

But Pepeliashko says he was also moved by the compassion of some of the medical staff, who provided them with new clothes.

“Even among bad people there is always someone who has a slightly kinder heart,” he said.

After the surgery they were taken to a prison camp; they don’t know where.

“We were placed in a tent for wounded prisoners. They only gave us a small cup of water every day. The worst thing for me was that I couldn’t even wash my hands. Only on the eighth day they gave me a packet of wet wipes to clean myself, “says Chyzh.

The pilots recalled hearing screams of pain from other tents. The curtains were freezing, they said, and they kept the fire going by burning books.

After three weeks they were transferred back to a prison in the Russian city of Kursk. Here there was no separation between injured and healthy prisoners. Everyone was beaten, Chyzh claims.

“They asked us, ‘How many of our people did you shoot down, you bastards?’ There were about 30 people in the room. There I was forced to stand without crutches and I was forced to undress and dress myself, “according to Chyzh.

Pepeliashko remembers lying on the floor and trying to make eye contact with a middle-aged woman who was among the guards.

“I was hoping that looking into my eyes would awaken her maternal instincts and tell everyone to stop the beating. But this did not happen. There was a void in her eyes. They wanted to show us that we are nothing. They wanted us to stop respecting ourselves ”.

Pepeliashko says it was his deepest moment of despair. “I thought: God, don’t you hear me at all?”

They even tore the cross from around his neck, he said. “’Why do you need a cross? There is no God here, ‘they said.

Their time in prison was colored by a constant deluge of Russian propaganda and efforts to brainwash prisoners, both pilots said. All day a radio in their cell blasted propaganda and lectures about Stepan Bandera, a Ukrainian nationalist who collaborated with Nazi Germany and was assassinated by the KGB after World War II, and whose followers fought both Nazis and the Soviets.

Ukrainian prisoners in an adjacent cell were forced to sing the Russian anthem and old Soviet songs, the two pilots said.

CNN asked the Russian Defense Ministry for a comment on the allegations made by the two pilots but received no response.

Chyzh and Pepeliashko claim to have survived the ordeal by imagining they are in a different place, maintaining a sense of humor and dreaming of what they would do in the future, while clinging to the hope that they would be swapped at some point.

“We shared recipes in great detail, we lectured on many different topics. I remember that Oleksii spoke of visiting Paris. I closed my eyes and pictured myself there. Then I promised myself that if I survived the imprisonment I would definitely go to Paris. He distracted from the pain, “Pepeliashko said.

In mid-April, the two were told they would be exchanged for Russian POWs. They didn’t believe it until they finally arrived in Kiev on April 14th.

During their captivity, they were told that Kiev had been “liberated” from Russia. They had no idea that the battle for Kiev never really took place and that the Russians eventually left the region to focus their efforts on eastern Ukraine.

Rehabilitation will be a long journey for both of us. Chyzh still struggles to walk on crutches. He told CNN that the hospital was now home to him. “This is all I have. I have nothing else. ”

They are obviously happy to be alive and to see their families again, but the war still weighs on their minds. They worry about their comrades who continue to carry out dangerous missions.

It is not yet time for the trip to Paris: both drivers say they want to get back to the fight.

“We didn’t go through this hell to give up,” Pepeliashko said. “Our whole life is the way to heaven. And we will do everything to get back to the helicopter cabin. ”