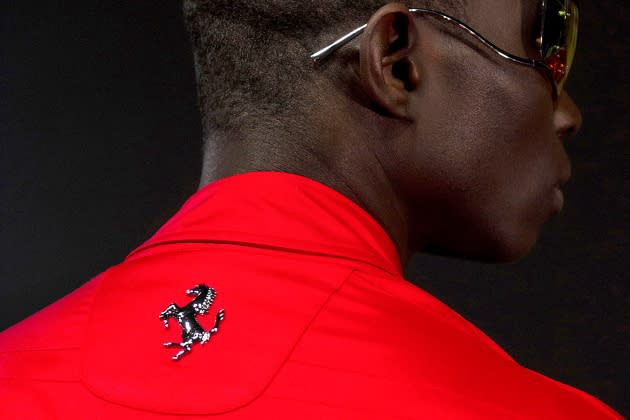 FIORANO, Italy – The charm of Made in Italy is strong and Ferrari intends to exploit it.

The intention to further expand the brand’s luxury lifestyle offering was clear during Ferrari’s Capital Markets Day on Thursday, on the eve of Milan Men’s Fashion Week.

The event outlined several initiatives, from developing electric cars to analyzing hydrogen fuel and achieving carbon neutrality by 2030, but building a luxury lifestyle brand was also addressed by President John Elkann and the ‘CEO of Ferrari Benedetto Vigna.

“Ferrari is fundamentally a luxury company and the most distinctive and innovative luxury brand, and we see tremendous opportunities for further developing its lifestyle,” said Elkann, stressing the importance of “never getting off compromises to be the unparalleled expression of Italian excellence “.

To be sure, Vigna said that by 2026 Ferrari aims to double revenues in the lifestyle division through luxury goods, experiential parks and museums of the brand and collectibles, compared to 2019, without providing a breakdown.

“We have only touched the surface and our lifestyle pillars can be used to delight customers in different ways and moments. We have a strong legitimacy ”, enthusiastically affirmed Vigna. “Either you are fully committed or you are not, and we are. We are serving only a fraction of the $ 300 billion market. This is a unique opportunity to make the brand relevant to a wider audience. Focus is key and we need to tackle it with the right partners and talents to make it happen. It’s a new world ”.

In an interview on the sidelines of the event, when asked about the importance of fashion to convey this lifestyle message, Vigna said it can reach “a very wide audience and offers expansive visibility”.

Ferrari has seen a rejuvenation of its loyal customer base over the period 2018-2022 and a 60% growth in new collectors, with a 25% increase in the average number of cars. This is seen as a potential new customer pool for the brand’s luxury fashion as well as key regions such as Asia. “Women are also increasingly interested, they become our ambassadors and help influence purchases,” Vigna said.

The global appetite for luxury is growing, he said, but insisted that Ferrari produces “unique cars and products” and is adapting founder Enzo Ferrari’s motto of providing “one car less than market demands. “to the lifestyle division to maintain exclusivity.

Ferrari repositioned its fashion brand, streamlining its distribution, opening two stores in the United States and reducing its licenses. In addition, it further highlights its theme parks, such as Ferrari World in Abu Dhabi, and its recently renovated historic “Il Cavallino” restaurant, named after the brand’s rampant horse symbol and opened by the founder in 1950.

Vigna realizes that major Ferrari fans who perhaps just want a cap with the brand’s logo shouldn’t be overlooked. “We need to be inclusive and exclusive and make sure the offering is consistent with the brand.”

He stressed the importance, “in any business, of creativity, resources, execution and concentration” and thwarted the concept of brand differentiation. “What is that? It’s a dead concept. Ferrari is a lifestyle.”

This consistency was also underlined by Iannone. “After optimizing our licenses, now is the time to build with a strategic focus and consistency in creativity and design,” he said in a separate interview with Liuni. “But we all know it’s a long journey that takes time and patience.”

Liuni touted the importance of a real Ferrari fashion collection, stating that “fashion plays a fundamental role, it acts as an amplifier, it allows us to talk about creativity, identity and values ​​in a way that no other sector allows”.

He admitted that it was “a very ambitious project, even if there is a side of the glamor that helps us in this project”. In accepting the job, she was drawn to the “power of the brand in the collective imagination. I think there is a culture behind it, which has never been fully explained. A luxury lifestyle brand cannot be identified with a single product and I’m here to help orchestrate, plan synergies and communicate consistently. I am obsessed with consistency of thinking, style and discipline. This is as important as creativity and excellence in execution. “

Ferrari staged two fashion shows, the first last year at the company’s headquarters in Maranello, followed by one in Milan during February fashion week. Iannone, who said the collections will be presented regularly twice a year in Milan, confirmed that he is working on his next show scheduled for September. Again, he will be coed, as he believes this is the most suitable format for his design message.

Iannone and Liuni already seemed to get along like a house on fire, and the designer sees his arrival as “an impeccable government. It will help to regulate ”the existing world of merchandising with that of the luxury fashion brand and the image it has been in charge of developing. “It excels at building a brand and creating a narrative of a universe.”

“Ferrari is wow,” Liuni said. “It represents Made in Italy like no other brand also for its values, creativity, technology, innovation and design.”

Ferrari’s revenues are expected to increase to € 6.7 billion by 2026, from the € 4.8 billion forecast in 2022, with profit before interest, taxes, depreciation and amortization reaching between € 2.5 billion and € 2.5 billion. 2.7 billion euros and a margin of between 38 and 40 percent. In the period from 2018 to 2022, the industrial free cash flow accumulated by Ferrari is expected to reach 2.46 billion euros. In the period from 2022 to 2026, it is expected to reach between 4.6 billion and 4.9 billion euros. When asked about potential mergers and acquisitions, Vigna said the company is strengthening its ties with its suppliers but is not currently looking to acquisitions.